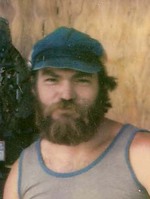 Kirk Haydon McCracken was born on May 14, 1948, the third child of Wm Gordon and Ruth (Wallace) McCracken.  During his early childhood, he moved with his family to Oregon and lived in St Helen, Gaston and Hillsboro.  The family eventually returned to California and made their home in Sacramento.
During high school, Kirk excelled in sports, graduating in 1966.

With the threat of being drafted by the U.S. military, Kirk opted to enlist instead - much to his parents' dismay.  He served in the Vietnam war.  While still overseas, with the horrors he experienced, he wrote his wife and asked for her to divorce him.  In September of 1970 their divorce was final.  Kirk returned home shortly after, a troubled man and addicted to drugs according to his mother.  He drank heavily and was frequently drunk.

On June 4, 1971 in Reno, Nevada, Kirk married Sue Rene Krauklis.  The married was dissolved shortly after.  Later that same year he married Elizabeth C Pardue.  That marriage ended in divorce in November of 1971.

Kirk opted for a change of scenery and moved in with his sister, Kathleen, and her family in Hillsboro, Oregon.  He met a young girl who worked for his sister's telephone answering service and the two began dating.  On April 23, 1972, Kirk married Susan Kay Mulloy (already a month pregnant).  The newlyweds moved into a small three bedroom house owned by Kathleen's in-laws.  Kirk continued drinking and his marriage suffered.  In September he packed up his blue pick-up he named "Babe" and returned to his parents' home in Sacramento.  Susan returned to her parents.  In December she gave birth to a son.  In 1973 she divorced Kirk and remarried.  Kirk signed papers to allow her new husband to adopt the child.

In the Spring of 1975, Kirk once again returned to Hillsboro.  He met a woman who worked with his sister, Kathleen.  The couple began dating and on September 20, 1975, Kirk married Maria Elena Brazan.  The couple divorced in the fall of 1977.  Maria returned to Texas.  Kirk moved back to Sacramento.

In Sacramento, Kirk began a tire business.  In 1988 he took a risk and bought a restaurant.  The risk proved costly when the business failed.  Kirk took a huge financial hit.

On August 2, 1992 Kirk married Pamela Ann Snodgrass in Sacramento, California.  According to Kirk, his new wife wanted to return to Texas to be near her family.  In 1995, Kirk decided to make the move to make her happy.  He moved her and their belongings to Texas while he tied up loose ends in Sacramento so he could join her.  However, before he could, she filed for divorce.  It was finalized on September 14, 1995.

Kirk's health took a turn when he was diagnosed with diabetes.  Now he would have to be more careful with his diet and give himself insulin shots.
In 2000, his doctors were concerned about the circulation in his legs.  They feared they would have to amputate, something Kirk had said he would rather die than have done.

On evening of March 7, 2000, after drinking a few beers, Kirk gave himself a shot of insulin.  His lady-friend questioned him because he had already given himself a shot a few hours earlier.  He told her he knew what he was doing.  He went to bed.  In the early hours of March 8, 2000, Kirk's heart stopped beating.