The family moved several times during Kathleen's early childhood.  During her teen years, they moved north to Oregon, living in Gaston and then  Hillsboro.  In May of 1953, Kathleen graduated from Hillsboro Union High School where she met a young man named John Micheal Huff.  The two were married on August 1, 1953.

In  April of 1954, after a rough pregnancy, Kathleen gave birth to her first child, a son.  Over the next eight years the family kept growing and kept moving around Oregon from Hillsboro to Pendleton to Coos Bay to Klamath Falls and back to Hillsboro.  After the birth of her seventh child in 1962, the family moved to Sacramento, California to be near Kathleen's family.  In 1968, the family returned to Hillsboro, Oregon where they built a new house and settled at 1062 SE 8th Street.

Kathleen quickly became a respected business-woman.  In 1970 she bought the Hillsboro Day and Night Telephone Answering Service.  In 1976, she sold it.  While operating her business, Kathleen took on the around the clock care of her father-in-law until his death, worked at a gas station and worked as a 911 dispatcher for Washington County.  She also enjoyed several hobbies: baking and decorating wedding cakes, sewing, knitting and crocheting, painting ceramics and playing the piano.

Kathleen had always dreamt of being a doctor.  In 1977, she began taking classes to become an EMT (Emergency Medical Technician).  In the Fall, she completed her courses, however, she began having chest pains.  A physical revealed a heart condition.  Though she brushed it off as nothing serious it kept her from her dream.

On the evening of December 23, 1977, while relaxing at home with her husband and family, Kathleen suffered a heart attack.  She was pronounced dead at 11:30pm. She was buried at Mt. Calvary Cemetery in Portland, Oregon, overlooking the valley toward Hillsboro. 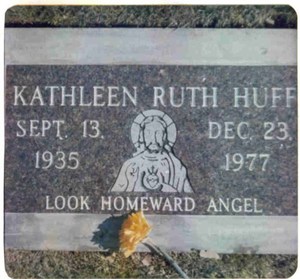