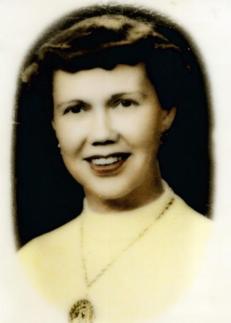 Ila Carol White was born February 27, 1915 in Baker, Oregon to Eldridge and Elma (Hull) White. She was raised in Baker and graduated from Baker High School in the spring of 1933.

In 1935 Ila and John Albert Teufel were married.  The couple settled in Hillsboro, Oregon where John's family owned and operated Oregon Roses nursery on Hwy 8 & SE 10th Street.  In June of 1936 Ila gave birth to her first child, a son, Fredrick.  In 1939, her second child, a daughter was born and named Judith.  Their last child, Timothy, was born in 1941. Ila and John eventually divorced.

Ila owned green houses and grew flowers for shipping. She was a member of the D.A.R. Ila enjoyed quilting, sewing as well as fishing and being outdoors.