Helen Mildred Huff was born October 8, 1920 in Heppner, Oregon.  She was the third child of ten born to Andrew Elick and Marguerite Delphine Huff.  She was so tiny at birth, her parents wrapped her up and tucked her in a shoebox on a warming shelf of the wood cookstove. They did not think she would survive.  Her childhood years were spent growing up in northeastern Oregon.  The family moved often between their 160 acre homestead in the Blue Mountains near Heppner,  Hermiston, Pendleton, LaGrande in Oregon and Walla Walla, Washington.  At the age of twelve, Helen and the family returned to the homestead.

At age 16, after helping her family through a bout of illness, Helen went to stay with some friends in Heppner to get some rest.  It was while she was there that she met the man she would marry.  A friend was bringing a man into town to meet a girl when they happened to run into Helen.  The friend introduced the man, Richard Liesegang, to Helen and the two hit it off.  When the friend told Richard that they needed to go to meet the other girl, Richard told him, “I’ve already met my wife.”  Helen and Richard were married in Hermiston three weeks later on November 14, 1936.

In the years that followed, Helen and Richard had eight children of their own.  They eventually moved with Helen’s parents and family to Hillsboro where Richard worked as a baker at Confection Bakery.  In 1958, tragedy struck the family when Helen and Dick’s eldest son, Richard Frederick, was in a motorcycle accident.  Four days later, he died from his injuires.

On November 11th, 1961, Richard suffered a heart attack and died leaving Helen alone to finish raising their seven remaining children.  He was buried in Fir Lawn Cemetery in Hillsboro, Oregon on what would have been their 25th wedding anniversary.  But they did have more joy in one another in that 'almost' twenty-five years than most people can ever hope to have in a hundred years.

Helen, having never completed high school or held a job outside the home, suddenly had to find a way to support her family.  She secured employment at Techtronix in Beaverton.

In 1965 she met and married Vernon Kingsbury.  With his four teenaged children, Helen’s family grew.

In the mid 1970’s Helen and Vernon moved to Omak, Washington.  After his death in 1982, Helen returned to Hillsboro.

Helen was an avid gardener and knew her way around a barnyard.  She loved to cook, bake and can the fruits of her garden.  She was the happiest when surrounded by her loved ones.  Still, Helen was more than that.  Having helped to raise her younger siblings, she was like a second-mother to them.  She was also a mother to everyone, a confidant to those needing an ear, advisor with wisdom beyond her years, and a valued friend.  Yet there was always room in her heart for one more.

On the morning of October 12, 2006, Helen passed away in her home in Hillsboro, Oregon.  She was buried in Fir Lawn Cemetery near her parents, sister and nephews.

- submitted in part by Elizabeth Jones 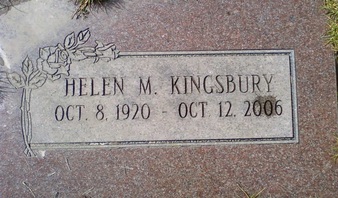