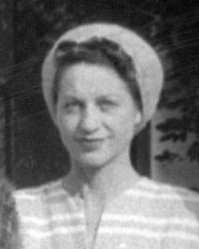 Connie was raised in Santa Monica and at age 20 was working as a dressmaker.

In April of 1930, Connie married Howard Hadden Hastings Thompson, a teller at the L.A. Gas Co.

On December 7, 1931, the couple welcomed their first child, a daughter, Lark Hastings Thompson.  Their joy was cut short as on December 8th, their precious daughter passed away.

Constance and Howard continued to live in the Santa Monica area for a time but the couple eventually divorced.